The Alberta CAPC CPNP Coalition, formed in December 2007, is a network of CAPC and CPNP projects throughout Alberta committed to collective actions and effective partnerships to ensure healthy outcomes for babies, children and their families. All CAPC and CPNP projects, funded by the Public Health Agency of Canda, Alberta Region are members of our coalition. Currently, there are 28 CAPC projects and 21 CPNP projects in Alberta. 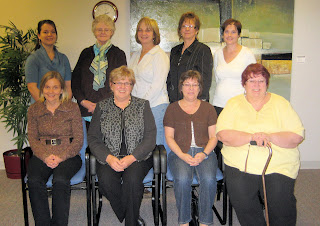 On October 23, 2009 the Coalition Coordinating Committee met in Edmonton, face-to-face to discuss the upcoming plans for the year. Joining the committee for this meeting, for the first time, was Norah Fines, the newly hired Coordinator, who will be working on contract until March 31, 2010.
The Coordinating Committee’s goals for the 2009-2010 year include:
1. Ensuring the Coalition is established and effective in fulfilling its mission and meeting its strategic goals.
2. Raising the community, provincial and national profile of CAPC and CPNP projects.
3. Contributing to the increased sustainability of CPNP and CAPC projects.
4. Supporting projects to enhance their quality of practice in programming and operation.
What to look forward to:
• Leadership Challenge face-to-face conference for all Coalition Members in Edmonton at Fantasyland Hotel to be held on March 1-3, 2010
• Historical Report of Coalition Outcomes and Efforts to date
• $1,000 funding for training to be awarded to projects that apply by December 8, 2009.
• Regular updates via blog, newsletters, and emails as appropriate.
• Money awarded for travel expenses for projects to participate in job shadowing experiences.
Funding is first-come first-serve, shadowing must be completed by March 15, 2010.
Posted by Alberta CAPC/CPNP Coalition at 12:34 PM

For a copy of past meeting minutes, please email request to capccpnpcoalitioncoordinator @gmail.com with relevant dates.